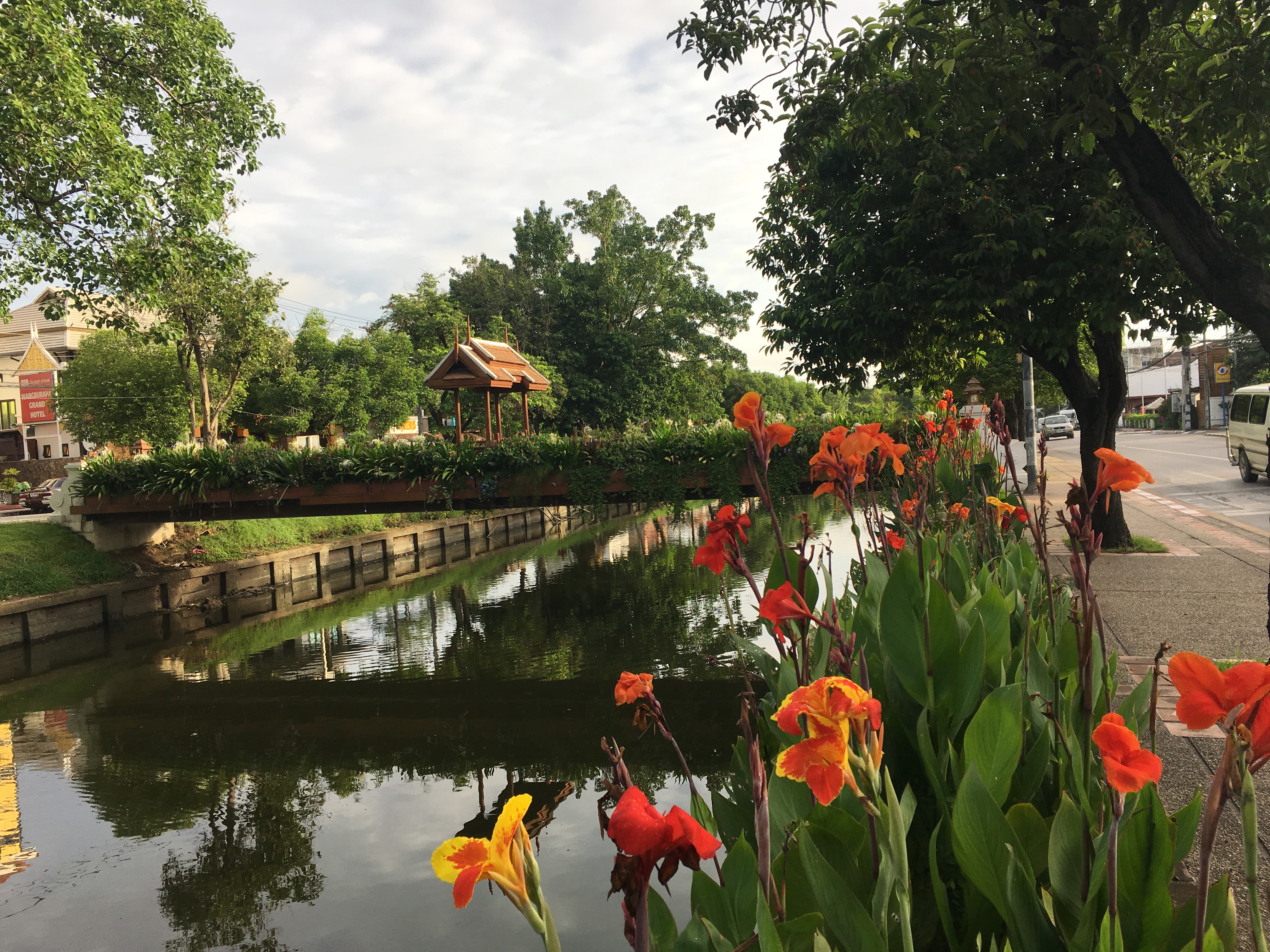 The hub of northern Thailand, Chiang Mai is the oldest and fifth largest city situated at an elevation of 316 m is surrounded by mountains and lush country side. Also called as ‘Rose of the North’, Chiang Mai means ‘New City’ as it became the new capital of the Lan Na Kingdom founded in 1296.
Chiang Mai’s historic importance is derived from its close proximity to the Ping River and major trading routes.With the decline of the Lan Na Kingdom, the city lost importance and was occupied by the Burmese in 1556. Chiang Mai formally became part of Siam in 1775 by an agreement with Chao Kavila, after the Thai King Taksin helped drive out the Burmese.
Because of Burmese counterattacks, Chiang Mai was abandoned between 1776 and 1791. Lampang then served as the capital of what remained of Lan Na. Chiang Mai then slowly grew in cultural, trading, and economic importance to its current status as the unofficial capital of Northern Thailand, second in importance only to Bangkok. 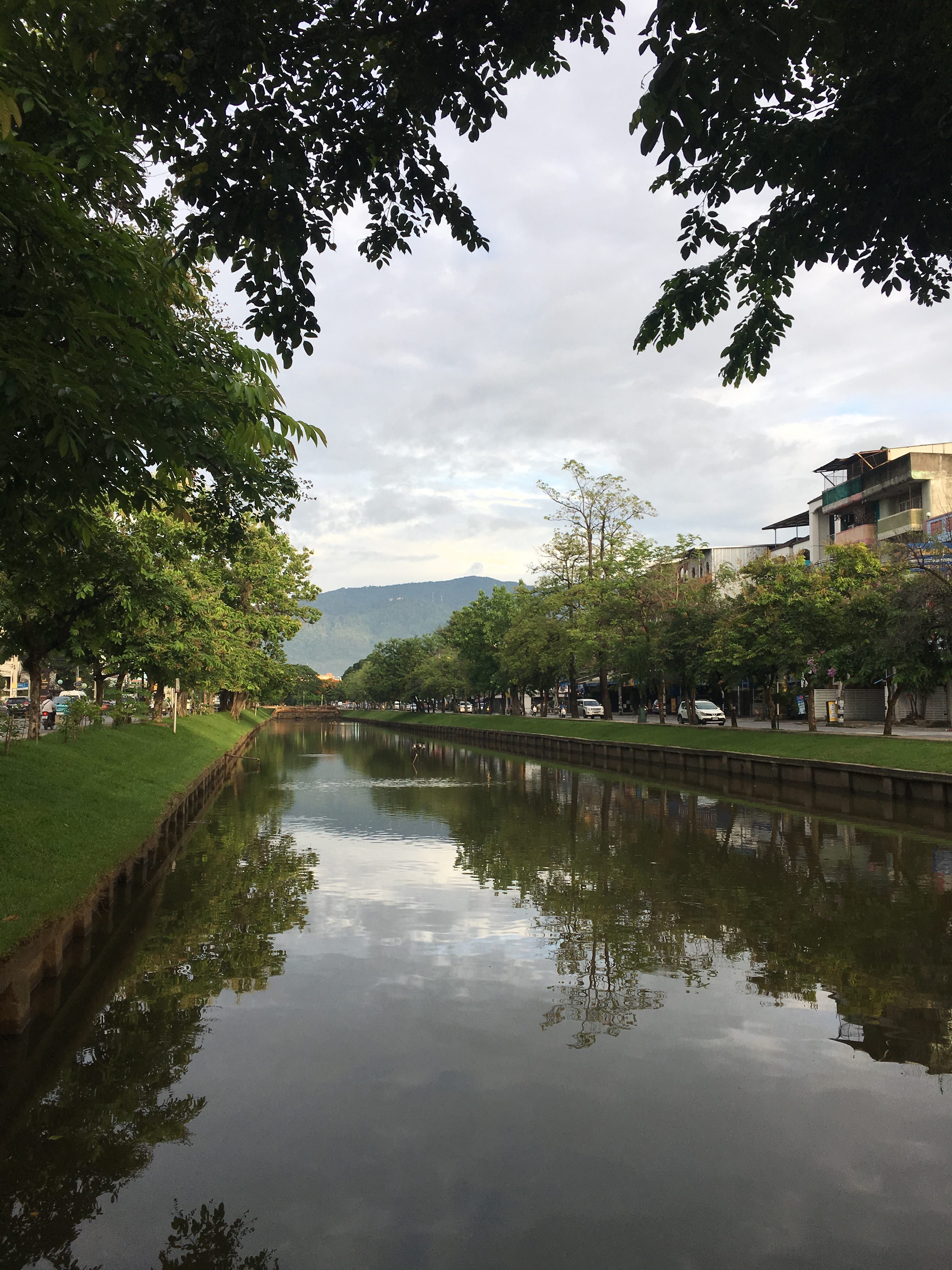 Rich in heritage and culture, the city is the land of misty mountains, runner’s paradise, shopaholics’ dream, lively nightlife, lip smacking cuisine and a delight for adventurers, the city has it all. A perfect blend of modern buildings and ancient temples, the city is gaining popularity amongst all the segments of travellers. Chiang Mai’s historical centre is the walled city, sections of the wall dating to their restoration a few decades ago remain at the gates and corners, but of the rest only the moat remains.

The city has more than 30 temples dating back to the founding of the principality decorated with beautiful wood carvings, Naga staircases, leonine and angelic guardians, gilded umbrellas and pagodas laced with gold filigree. 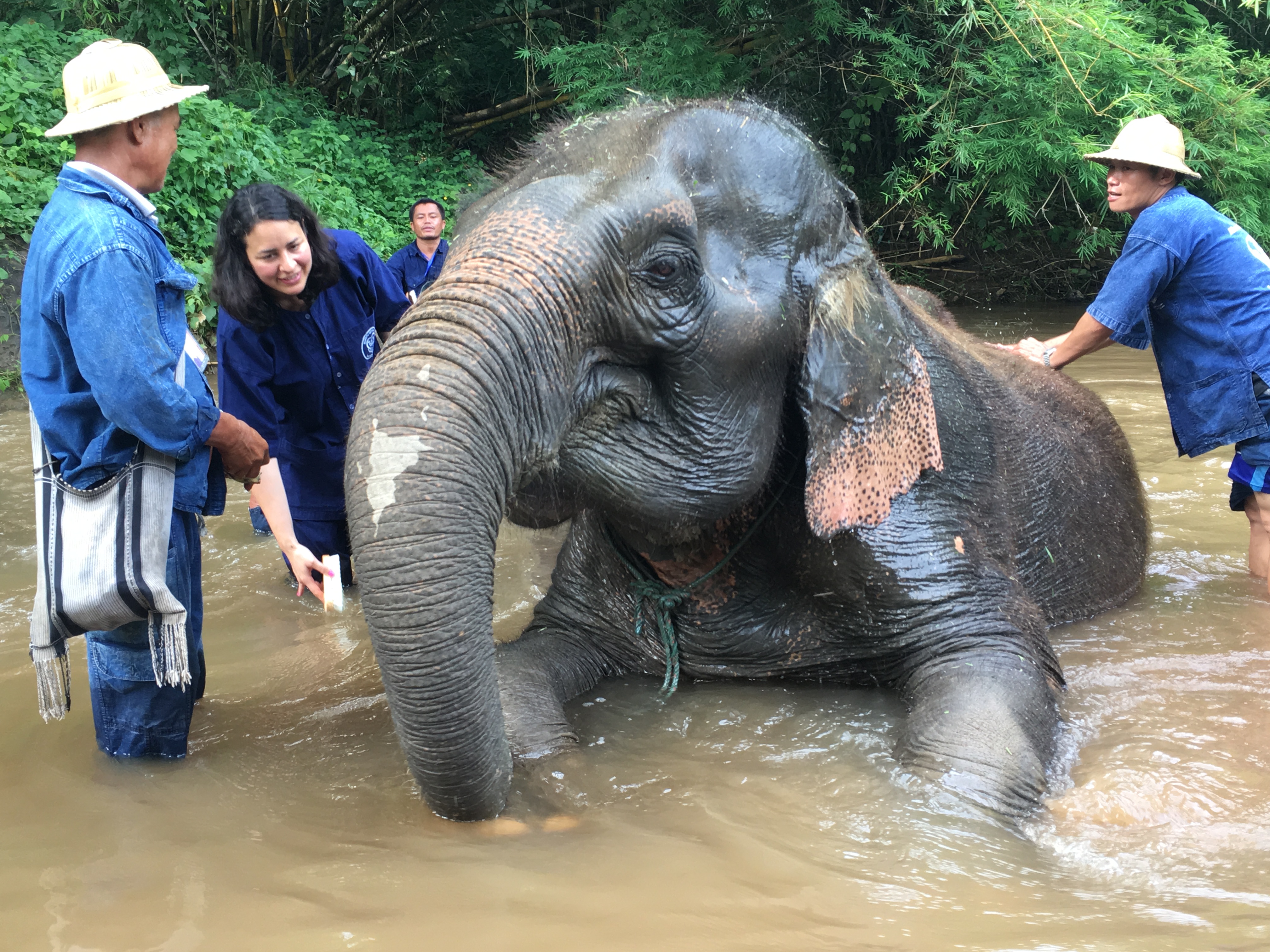 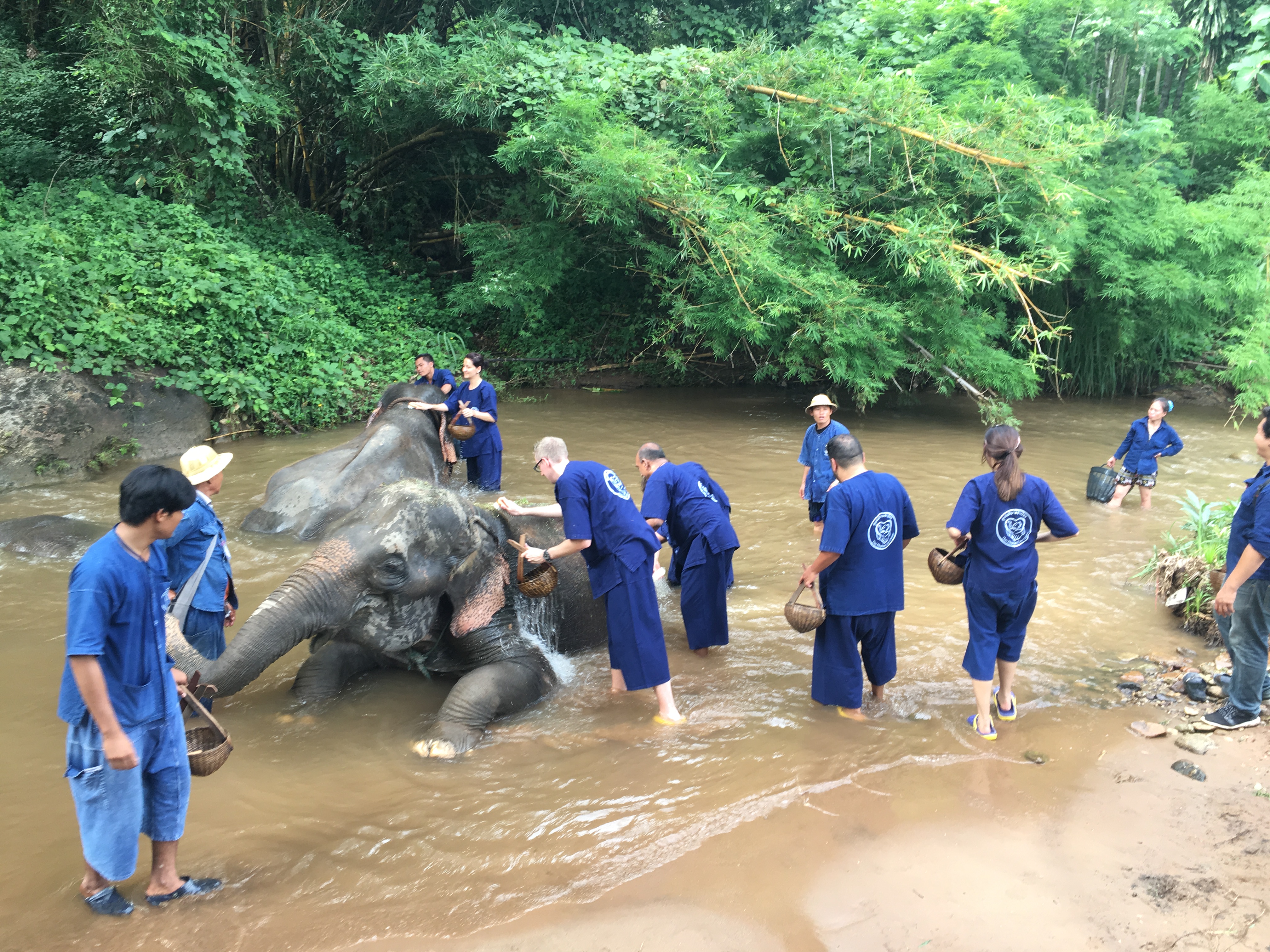 Founded in 1976, the centre was the first camp in Thailand certified by Department of Livestock. The centre was started keeping the thought in mind as to where did the elderly elephants live after they were not able to work or who took care when they were sick and what happened after they were dead. This centre takes care of elderly and sick elephants and buries them after their death in the same compound. The centre runs programmes from half day to 2 days with home stay. The programme include making feed and feeding elephants, a relaxing bath to elephants, mud spa, playing with elderly ones and visit to cemetery.
https://www.thaielephantcarecenter.com

Museum of Contemporary Art ( MAIIAM) in Chiang Mai was founded by Jean Micheal Beurdeley and his late wife Patsri Bunnag inspired by the arts and crafts of Chiang Mai kingdom to share their private collection they had built over last 30 years to enrich public and inspire new collectors. MAIIAM is housed in a 3000 sq. meter, converted warehouse in the historic crafts district of Sankampang.

The ﬁrm, known for its contextual approach to architecture, was given a core brief whereby they would let the art and not the architecture be the main attraction. The permanent collection hall on second floor of around 1300 sq. meters and two smaller exhibition rooms converts into an indoor/outdoor open space for show openings, live performances, and social happenings. There is also a restaurant and museum gift shop. The Museum houses the family’s permanent collection, which includes seminal works from the masters of Thai Contemporary art.
http://www.maiiam.com 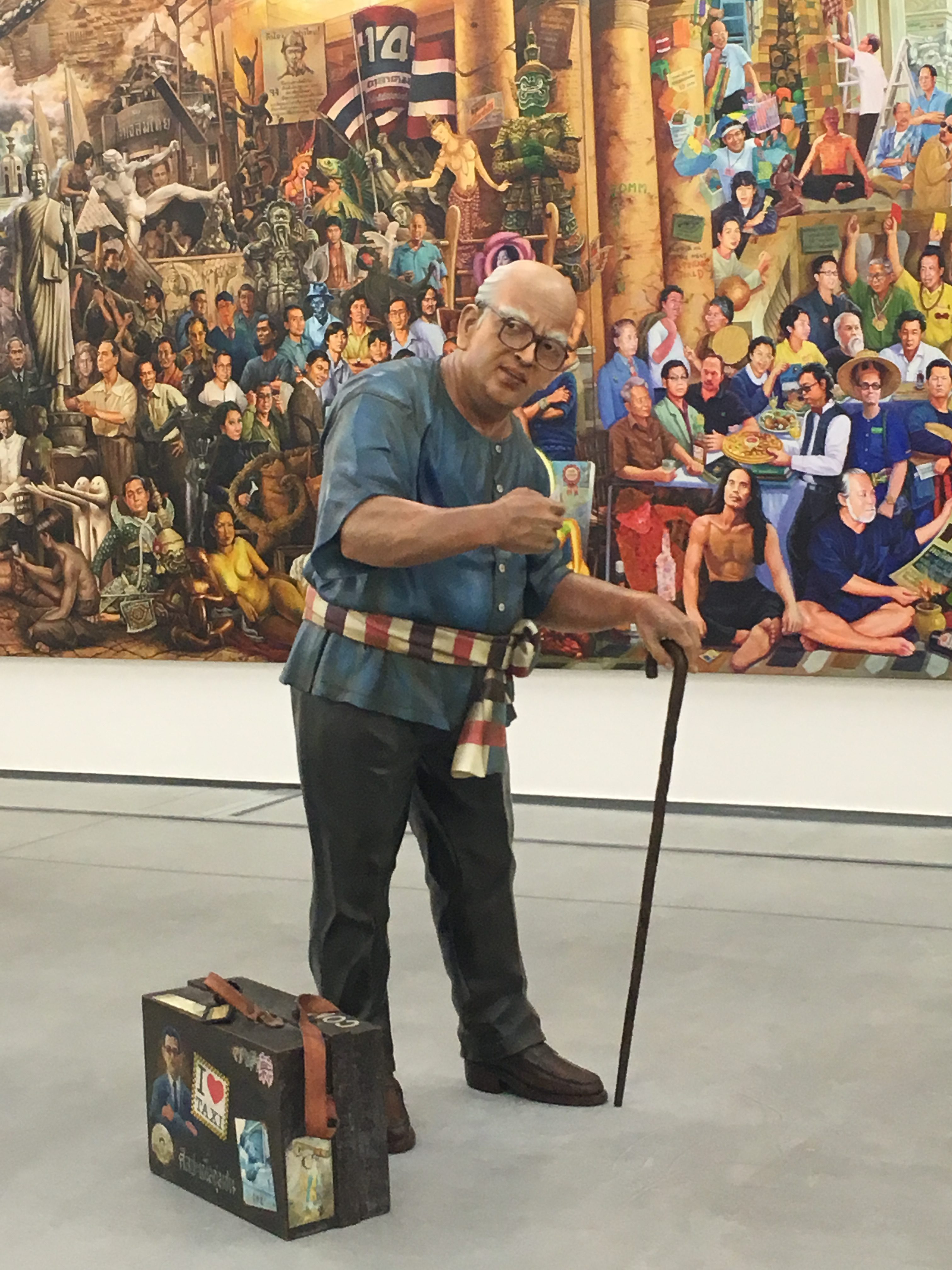 The classic image of Chiang Mai with its large gold-plated chedi( Pagoda) ,Wat Phrathat Doi Suthep is situated at a 1,073 m elevation on the slopes of Doi (Mount) Suthep. Built in 1383 during the Lanna Thai period, the temple offers a majestic view of the city climbing 300 plus Naga lined steps. Over time, the temple has expanded, and been made to look more extravagant with many more holy shrines added .A cable car is available for 20 bucks for not so fit to reach the temple. The temple is approximately 15 kms from the city. The original copper plated chedi is the most holy area of the temple grounds. Within the site are pagodas, statues, bells, a museum, and shrines and is also a sacred site for many Thai people.

The classic image of Chiang Mai with its large gold-plated chedi( Pagoda) ,Wat Phrathat Doi Suthep is situated at a 1,073 m elevation on the slopes of Doi (Mount) Suthep. Built in 1383 during the Lanna Thai period, the temple offers a majestic view of the city climbing 300 plus Naga lined steps. Over time, the temple has expanded, and been made to look more extravagant with many more holy shrines added .A cable car is available for 20 bucks for not so fit to reach the temple. The temple is approximately 15 kms from the city. The original copper plated chedi is the most holy area of the temple grounds. Within the site are pagodas, statues, bells, a museum, and shrines and is also a sacred site for many Thai people. 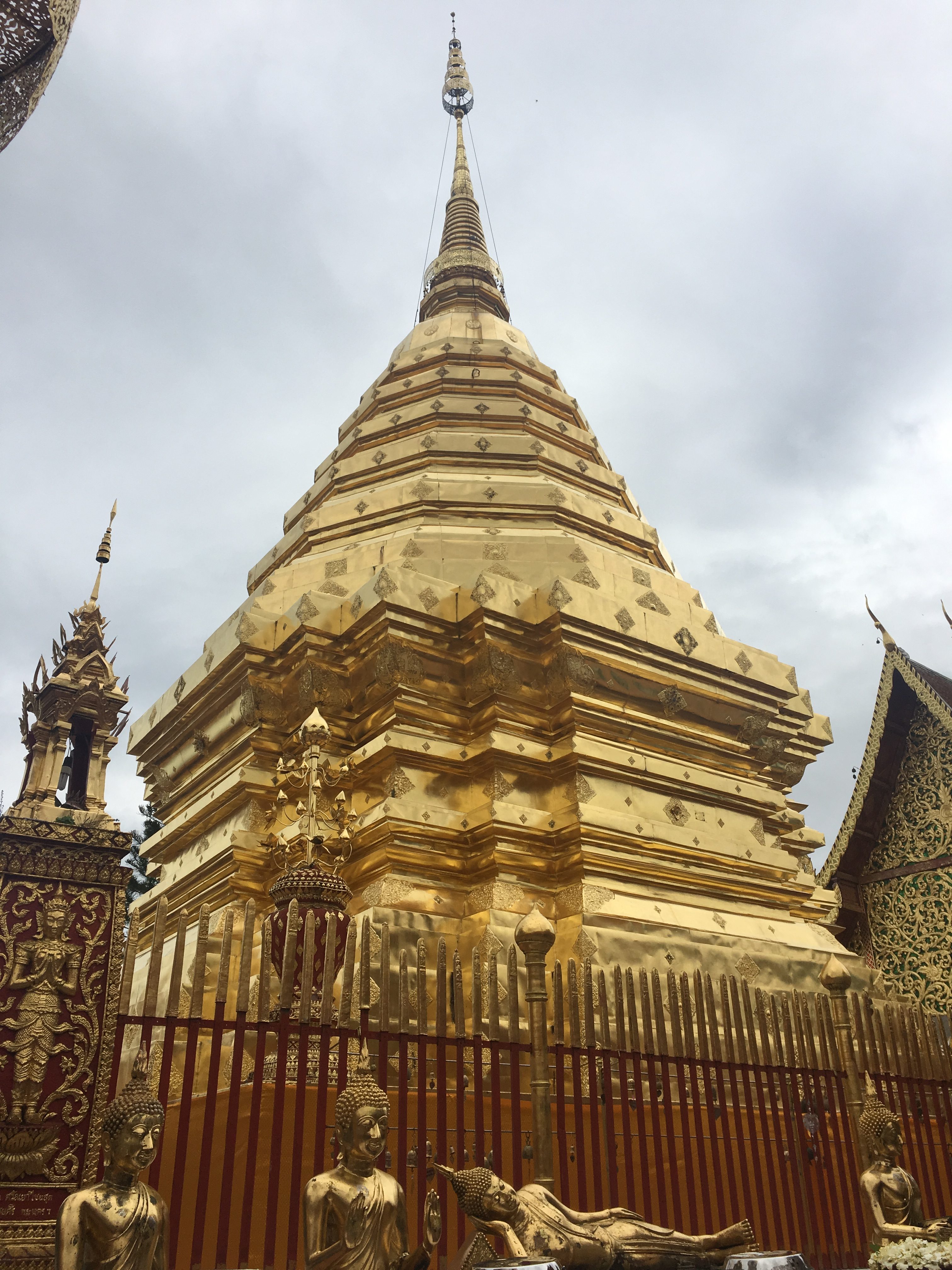 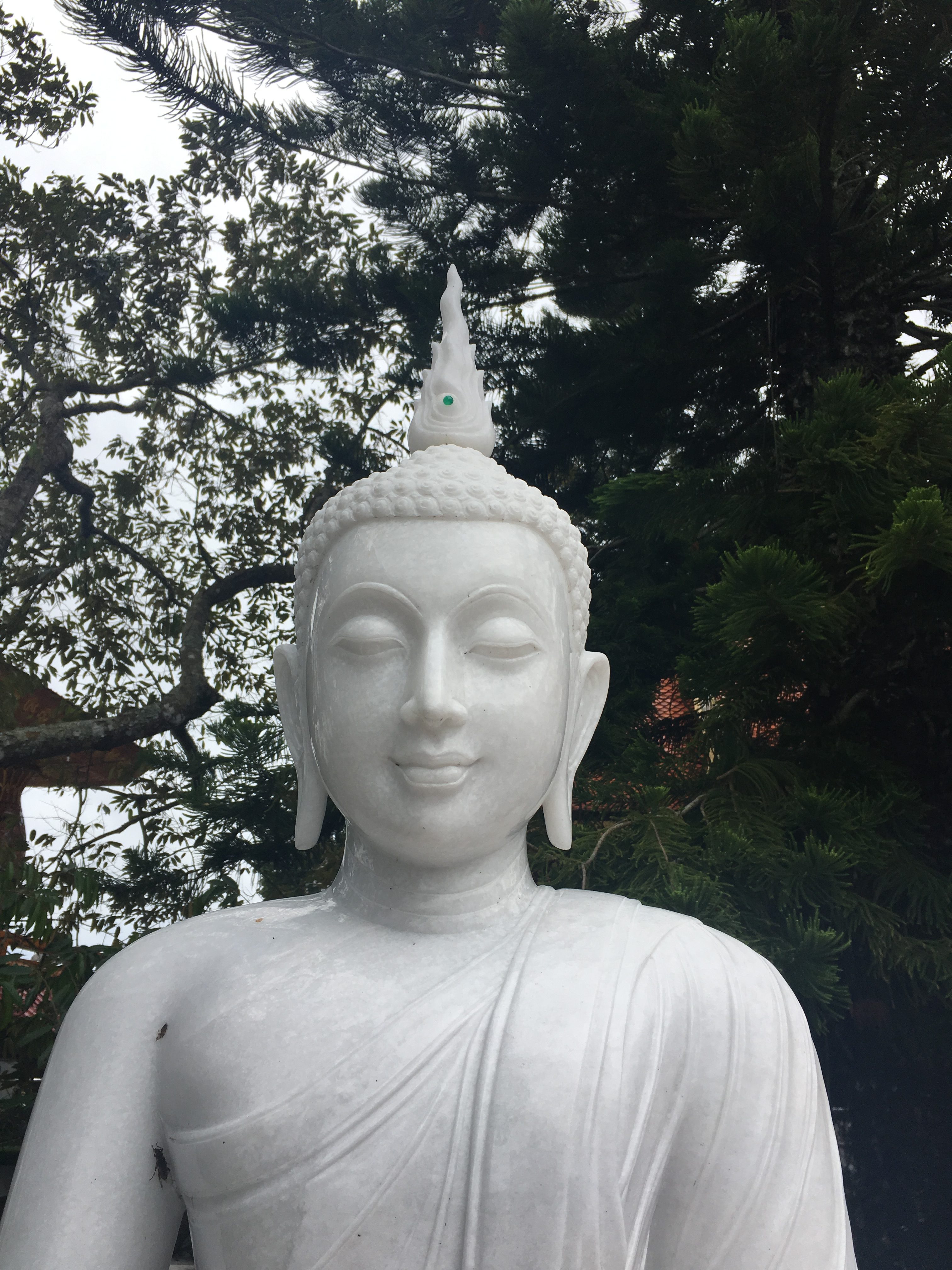 Constructed in 1401, remains of a massive Chedi that toppled in severe earthquake of 1545 lies in the centre of Chiang Mai was once home for Emerald Buddha. The original chedi was constructed on the orders of King Saeng Muang Ma, which was enlarged to the height of 86 m by King Tilo Garaj in 1454 making it as the largest building. On the temple grounds is the city pillar (Lak Mueang) of Chiang Mai, named Sao Inthakin was moved from Wat Sadeu Muang in 1800 by King Chao Kawila. A festival in honor of the city pillar is held every year in May and lasts 6–8 days. Wat Chedi Luang also hosts monk chats every day where tourists are invited to speak with monks and ask them anything about Buddhism or Thailand.

A Royal Buddhist temple founded by King Kue Na of Lanna in the year 1370 lies on Suthep Road of Chiang Mai. A large 48 meter high bell shaped chedi built in Srilankan style with stairs on all four sides leading upto terrace. The large sala kan prian ) is directly east of the main chedi was built in 1932 by the famous monk Phra Krubra Srivichai,. The main Buddha statues inside the sala kan prian are placed so that they look out at opposite directions. The statue of the Buddha seated in meditation looks towards the east, whereas the other statue, a standing Buddha holding a bundle of straw, faces west towards the chedi. A grouping of white washed mausoleums, which house the cremation ashes of members of the royal family of Chiang Mai, is in the northwestern quarter of the temple grounds. At the beginning of the 20th century, Princess Dara Rasmi, one of the wives of King Chulalongkorn (Rama V) and daughter of the Lanna king Inthawichayanon, had the ashes collected from around Chiang Mai to be interred at their present setting.

Inspite of the fact that the city is one of the oldest in the region having temples over 300 years old, city offers all the ingredients for a complete family holiday, millennial and women travellers drawing trendy bars, eat outs, authentic local coffee, hotels and resorts, adventure activities and wide range of spas for relaxation and rejuvenation. 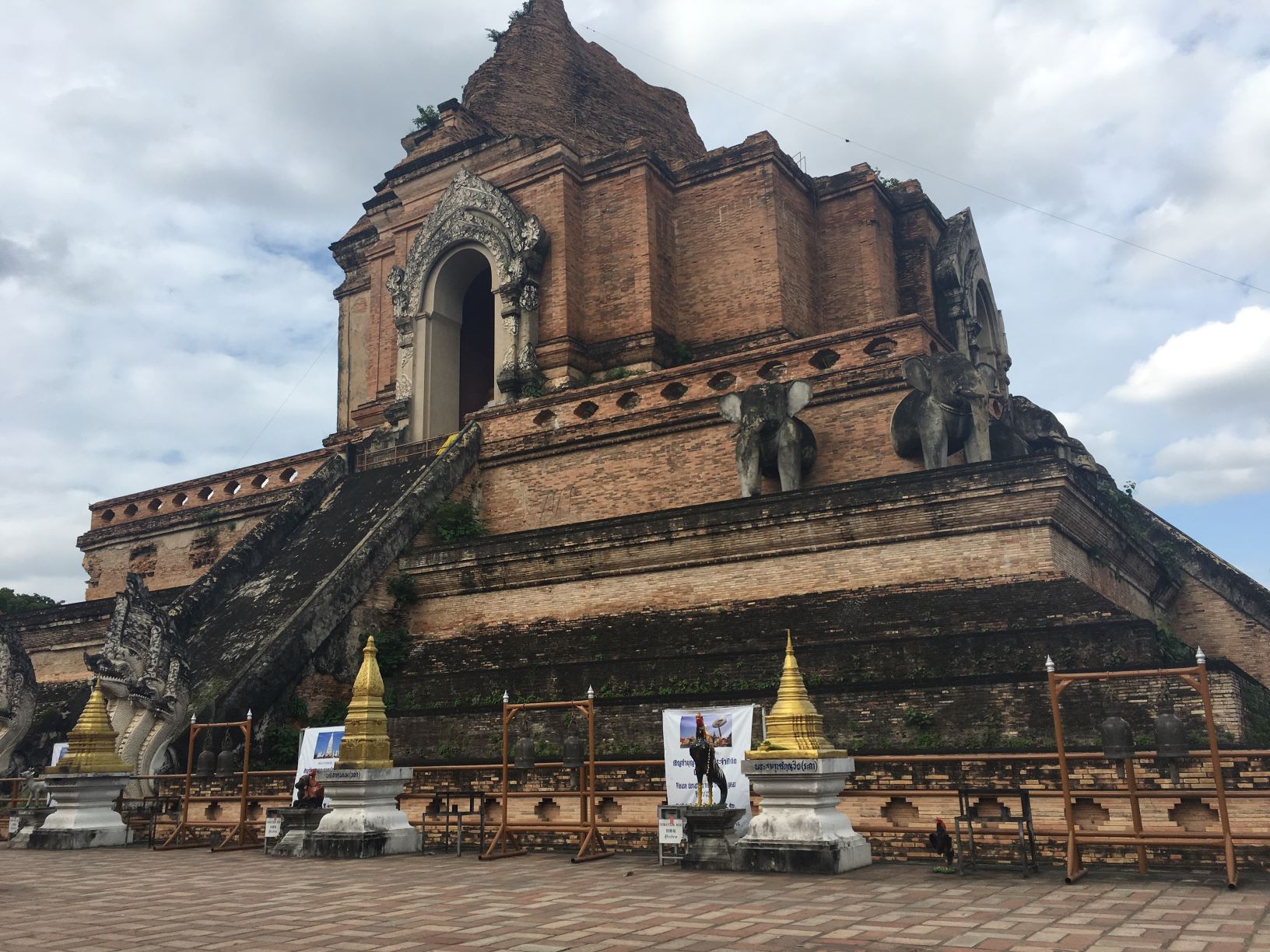 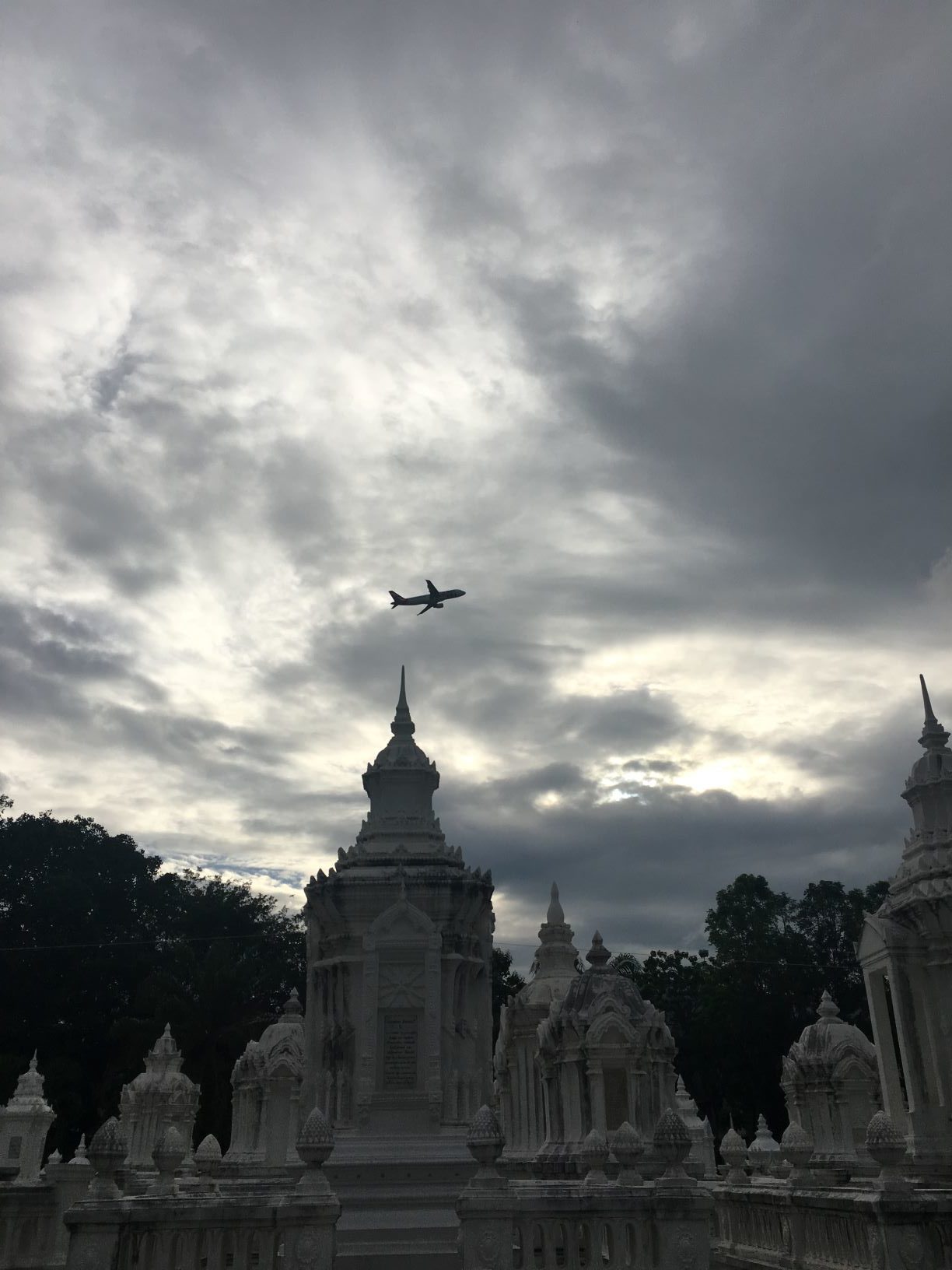 Currency : 1 Thai Baht = 1.90 INR
To Reach:
By Air: Chiang Mai International Airport is well connected and is one of the busiest airports of the country. Almost every hour Thai Airways flies from Bangkok and is an hour plus flight. Other regional carriers like Bangkok Airways, Air Asia, Nok Air also fly from Bangkok and other cities of Thailand.
By Bus: Buses ply from major cities to Chiang Mai. It takes about 12 hours from Bangkok to reach and can be booked online in advance.
By train: Regular trains leave Bangkok and take about 14-16 hours to reach Chiang Mai through picturesque landscapes. Tickets can be bought 60 days in advance at any station.